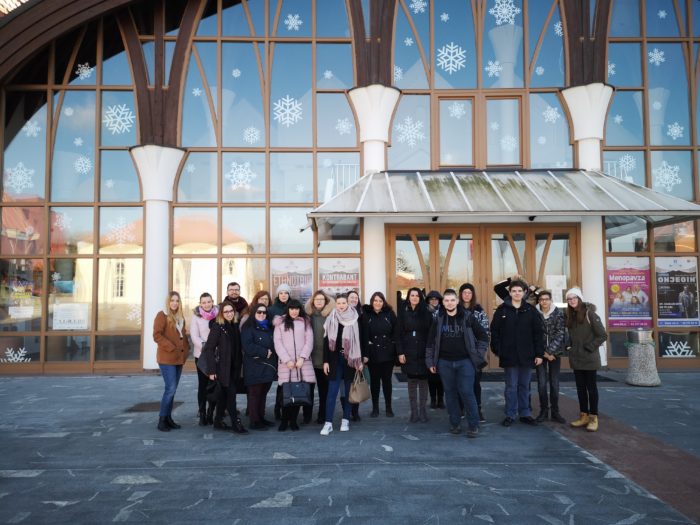 Our meeting started with a lunch in the Lovski dom restaurant, where the major of Lendava, Mr. Janez Magyar welcomed our guests. After lunch we went to the Adult Education Centre of Lendava, where we were playing some ice-breaking games.

During the knowledge improvement, we cooperated with EU Direct Office. Mr. Dejan Bogdan raised awareness to the importance of EU elections which will be held in 2019. He emphasised why youth should participate in the elections for a better future.

After a short break we were talking about the questionnaire and alumni database. We realized, that neither of our schools have had an alumni database. That’s why we decided to create our own database during the project.

In the evening we held the community event in the local restaurant, where our guests could taste the local cuisine, which is the intangible cultural heritage of our town. In the meantime, we were listening some interesting stories about the history of Lendava.

On 5 February we organised a networking breakfast, where the managers and principals of the local organizations presented how they are taking care about multiculturalism in their local environment and why multiculturalism is an added value of Lendava. After the presentation we introduced our summer project as an example how to involve youth in the local community. Before lunch we visited the Bilingual secondary school of Lendava where our participants realised, how to conduct the bilingual education. In the afternoon we held workshops, where we were talking about the strengths and weaknesses of Lendava and the possibilities for our youth (what is the added value of Lendava and why the youngsters do not come back to the city after finishing the university). We also tried to suggest solutions and elaborated policy recommendations.

On the last day, treasure hunting was organized in Lendava. The participants had to find, which nationalities are living in Lendava. After it, they visited the Lendava castle, where they became aware of the history of Lendava and had the opportunity to visit the temporary exhibition. Before the end of meeting, the advantages of Youthpass were presented. We hope, that our guests had a great time in Lendava.